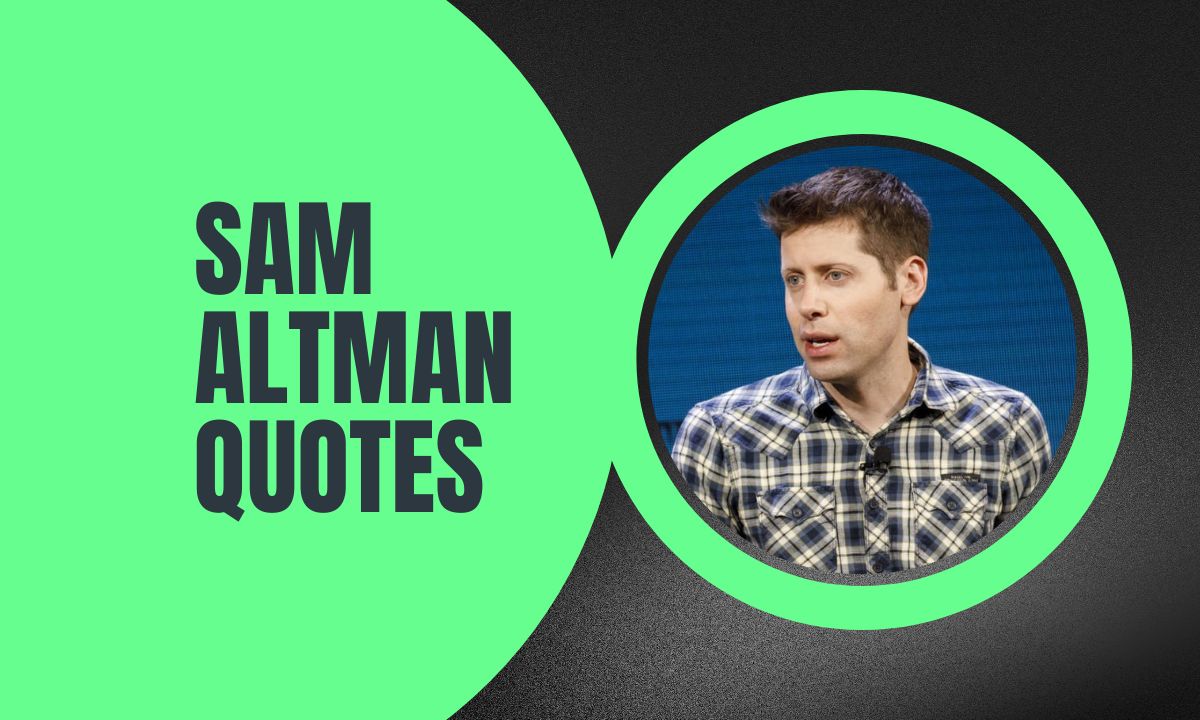 Sam Altman is a renowned entrepreneur, investor, and philanthropist who has made a significant impact in the world of startups and technology. His insights and wisdom on a wide range of topics, from entrepreneurship and innovation to leadership and personal growth, have been widely shared and celebrated. Whether you’re an aspiring entrepreneur, a seasoned business leader, or simply someone looking for inspiration and guidance, Sam Altman quotes offer valuable insights and perspectives that can help you navigate the ever-changing landscape of business and technology.

1. “AI will probably most likely lead to the end of the world, but in the meantime, there’ll be great companies.” ― Sam Altman

2. “One thing that founders always underestimate is how hard it is to recruit.” ― Sam Altman

4. “I think the mistake people make most often when they invest in other kinds of startups is they say, ‘This is totally different.’ And so the things that matter, like making a product that people desperately want, like talking to customers, they throw this out the window. That is a recipe for heartache and tears.” ― Sam Altman

5. “That culture of frugality and discipline is really important for the Y Combinator mindset.” ― Sam Altman

6. “Communication services need interoperability to succeed – and Loopt is the first such service since SMS that is available across all major U.S. wireless carriers.” ― Sam Altman

8. “It’s so important for startups to get their culture right at the start. They need to feel unique and that they are on their own important mission in the world.” ― Sam Altman

9. “Set a clear, easy-to-understand vision for your company, and make it be a mission people believe in.” ― Sam Altman

10. “All companies that grow really big do so in only one way: people recommend the product or service to other people.” ― Sam Altman

11. “Generally, you want to raise capital either when you have to or when it’s really easy. If the company desperately needs money, and they can’t figure out any other way, then they need to raise money. Or if someone’s offering you easy money on good terms, you should take it because you can use it for good things.” ― Sam Altman

12. “You really want a company full of missionaries, not mercenaries.” ― Sam Altman

14. “Startups on the inside are always badly broken.” ― Sam Altman

15. “Many founders hire just because it seems like a cool thing to do, and people always ask how many employees you have.” ― Sam Altman

16. “I wouldn’t call Loopt a failure. It didn’t turn out like I wanted, for sure, but it was fun, I learned a lot, and I made enough money to start investing, which led me to my current job. I don’t regret it at all.” ― Sam Altman

17. “The way to build billion dollar companies is to first build something people love. There isn’t really a shortcut there.” ― Sam Altman

18. “Intelligence is usually easy to tell in a 10-minute conversation. Determination is harder.” ― Sam Altman

19. “If you have the opportunity to go be an early employee at a company that’s just going crazy, and you believe it’s the next Facebook or Google, you should go join that company.” ― Sam Altman

20. “I don’t invest in companies where my mental model is that they need to get themselves acquired in the next few years – or ever.” ― Sam Altman

21. “Everyone is looking for the hack, the secret to success without hard work.” ― Sam Altman

22. “Making money is often more fun than spending it, though I personally have never regretted money I’ve spent on friends, new experiences, saving time, travel, and causes I believe in.” ― Sam Altman

26. “One of the things we urge Y-Combinator companies to do is to have profitability in grasp. If you need to get profitable before your A round of money, you ought to be able to do that.” ― Sam Altman

27. “The start-ups that do well are the ones that are working all the time.” ― Sam Altman

28. “People appreciate when you make an effort to speak their language.” ― Sam Altman

30. “I love working with really early stage startups where the outcome is still in doubt. Maybe they’ll go on to greatness, or maybe they’ll never get off the runway at all.” ― Sam Altman

31. “It’s easy to say, ‘I’m going to build something that already exists,’ but it’s difficult to clearly and succinctly describe something new.” ― Sam Altman

32. “Move fast. Speed is one of your main advantages over large competitors.” ― Sam Altman

33. “I believe whatever smart, ambitious people are working on will be the trend of the future. I do think that it’s worth thinking critically about what the future will be.” ― Sam Altman

34. “Being a public company is really terrible for most companies. I’d say Facebook and Google have done a pretty good job of standing up to the incredible quarterly pressure to hit numbers, but most companies – and I’ve observed a lot now – don’t do a very good job of that.” ― Sam Altman

36. “The crowd’s a really powerful force on the Internet, and people finally understand how to harness that.” ― Sam Altman

38. “Technology magnifies differences, and it’s been replacing or obviating jobs for a long time. But what happens as that case accelerates? I’m not one of these doomsayers who says, ‘There will be no jobs.’” ― Sam Altman

39. “Location is the sole difference between mobile and traditional Web.” ― Sam Altman

40. “There is a long history of founders returning to companies and doing great things. Founders are able to set the vision for their companies with an authority no one else can.” ― Sam Altman

41. “Don’t hire for the sake of hiring. Hire because there is no other way to do what you want to do.” ― Sam Altman

42. “Companies generally work better when they are smaller. It’s always worth spending time to think about the least amount of projects/work you can feasibly do, and then having as small a team as possible to do it.” ― Sam Altman

43. “People always make the mistake of calling an idea small or stupid because they don’t understand how it’s going to evolve.” ― Sam Altman

44. “The reduction in compassion that happens when we’re all behind computer screens is not good for the world.” ― Sam Altman

45. “The only way to generate sustained exponential growth is to make whatever you’re making sufficiently good.” ― Sam Altman

46. “I don’t think people spend nearly enough time thinking about what they like and what they’re good at.” ― Sam Altman

47. “If a company is profitable, the founder is in control. If it’s not, investors are in control.” ― Sam Altman

49. “There is a lot of stuff I like. I love backpacking. I love going to an island where I can just sit on the beach and read or scuba dive and sail. I do a lot of that. I still go backpacking around Europe in the summers and staying in hostels. I love that.” ― Sam Altman

50. “Don’t let yourself make excuses for not doing the things you want to do.” ― Sam Altman

51. “If you compromise and hire someone mediocre, you will always regret it.” ― Sam Altman

52. “Cofounder relationships are among the most important in the entire company.” ― Sam Altman

53. “Whether or not money can buy happiness, it can buy freedom, and that’s a big deal. Also, lack of money is very stressful.” ― Sam Altman

54. “There’s this famous observation that I totally believe: Great startup ideas are the ones that lie in the intersection of the Venn diagram of ‘is a good idea’ and ‘looks like a bad idea.’ So you want most people to think it’s a bad idea and thus not compete with you until you get giant. But for it to secretly be good.” ― Sam Altman